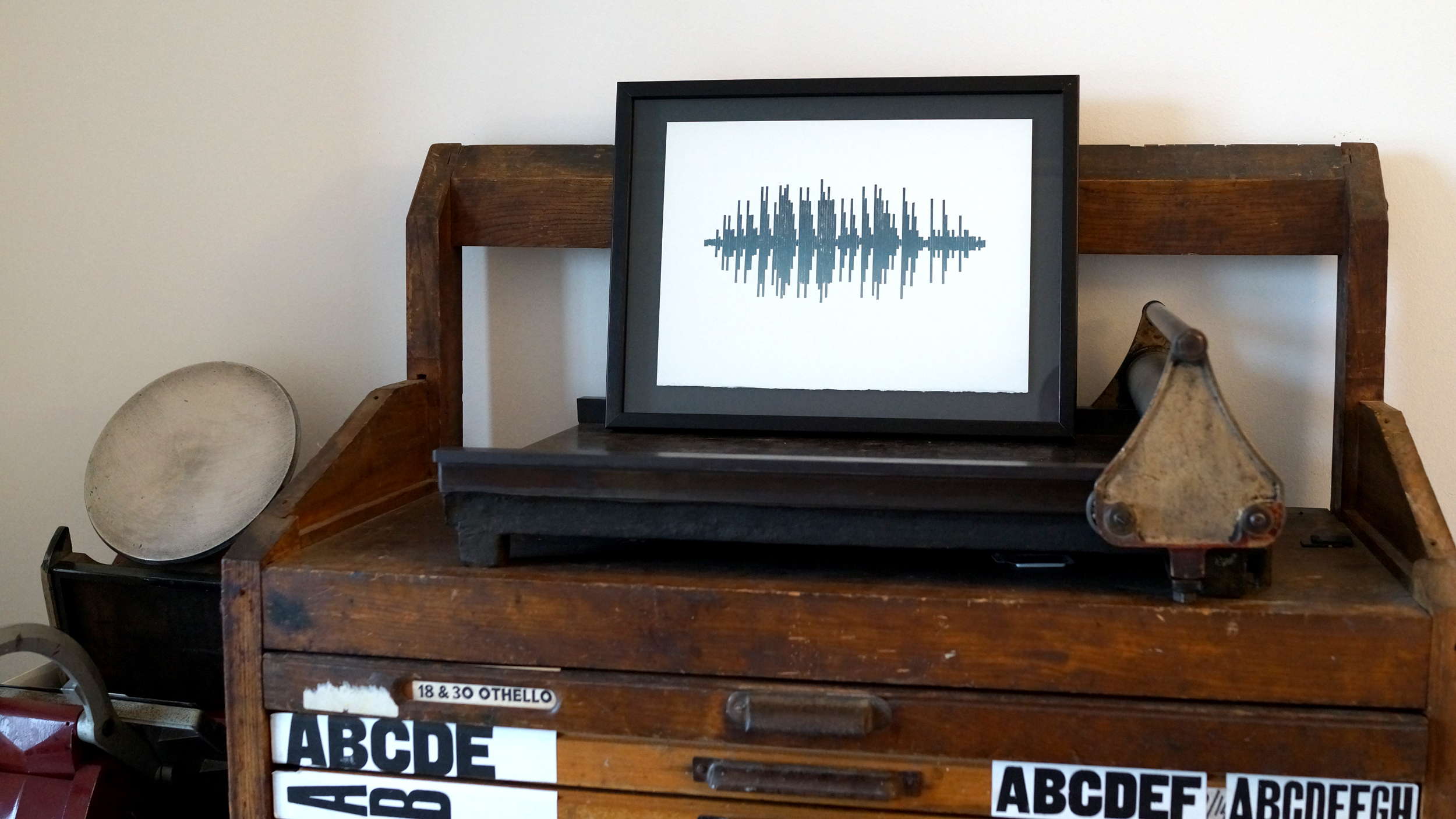 Last year I went along to the first Bristol Festival of Print, hosted by the Letterpress Collective at the Centrespace gallery in the city centre. I was heading there to meet up with Nick & Pat, from The Print Project & Nomad Letterpress respectively. I was pretty knackered on getting to the gallery as I’d spent the last 20 minutes lugging 30kg+ of Ludlow mats up a hill (I haven’t forgotten about them, Nick!). I therefore didn’t pay much attention whilst being introduced to a couple of people as I was trying to catch my breath. It was only after looking around a bit that I realised I recognised the organiser. It turned out that Nick Hand and I had actually once played in the same football team many years ago, about 10 years had passed. Neither of us had any idea that we would ever have something as random as letterpress in common. A nice surprise. I left with a much lighter bag and a promise to come back next year.

Fast forward to 2015. Nick got in touch and asked if I wanted to print a piece for this year’s festival, under the theme of’Music. Now, I don’t have a single musical fibre in me (ask Kat about my signing voice). I have also never printed anything for public display before. Eek. Last year there were prints on display by some of the great letterpress artists of the UK and beyond on display, so to say I was a little nervous about making something for the event would be a massive understatement. Prints from The Counter Press, Whittington Press, Tom Mayo, The Print Project, Alan Kitching and many more were present last year. To try and make something anywhere close to their standard petrifies me.

I didn’t want to resort to setting some clichéd song lyrics in wood type and had two completely different ideas. I couldn’t decide which would work best so I figured I’d try and realise both of them – at least one might be suitable, right?

A drummer friend once tried for days at a music festival to teach me a simple drum beat called a paradiddle. I couldn’t remember how the rhythm went, but I did remember the name. The definition of a PARADIDDLE is: a quick succession of drumbeats slower than a roll and alternating left- and right-hand strokes in a typical R-L-R-R, L-R-L-L pattern. It goes a little something like this:

Great, now to break out the wood type and set the rhythm. I got myself and the forme that I had set to Wales, which is where my beloved Farley proof press lives and after creating an imaginative lockup using a variation of grotesque wood type ranging from 40-line to 6-line I hand inked the type. (Note: I’m embarrassed to show pictures of this to the internet as it is definitely not the right way to do it). 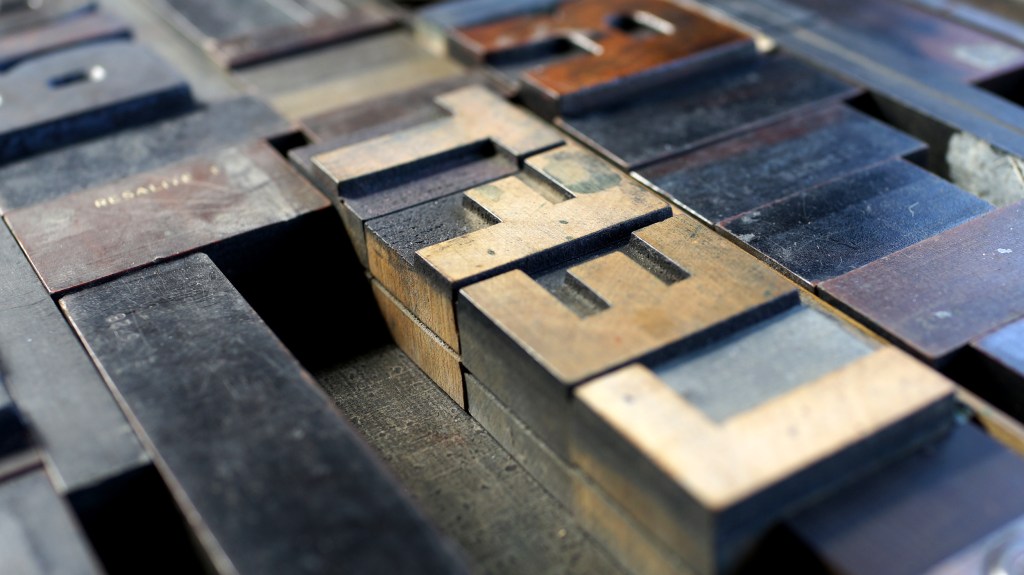 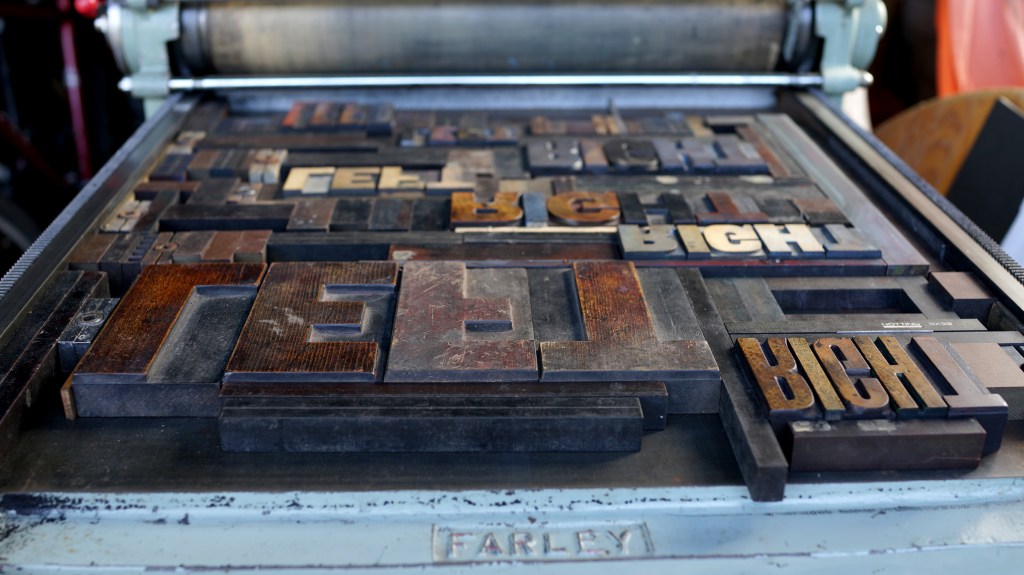 I decided to print on a black paper stock, which meant I could break out the silver ink as it is much more opaque than white – something to do with the metallic pigments(?). In order to differentiate a little more between left and right, I added cyan blue to the silver to create a second metallic blue colour. I love seeing the skin on a can of ink! 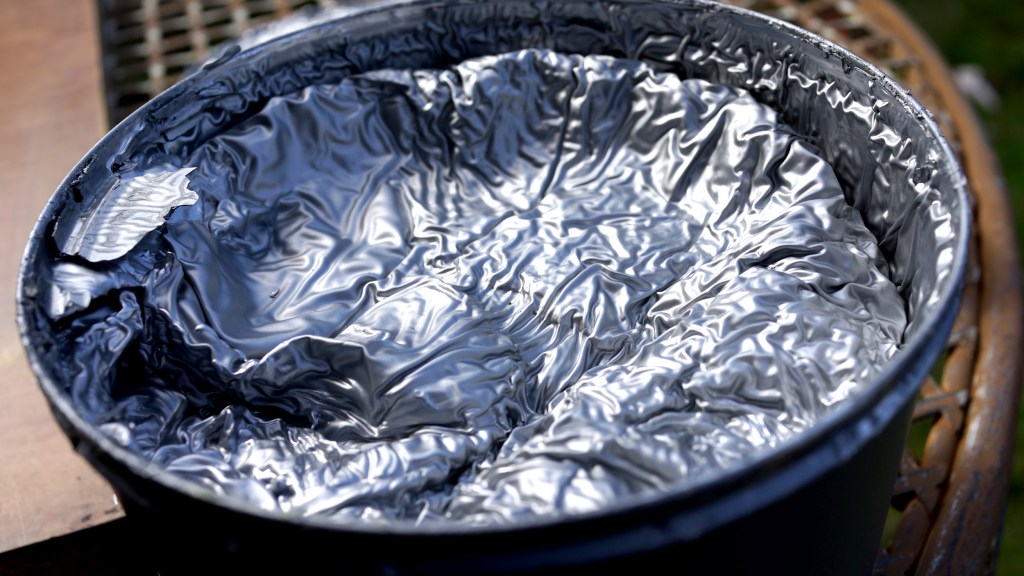 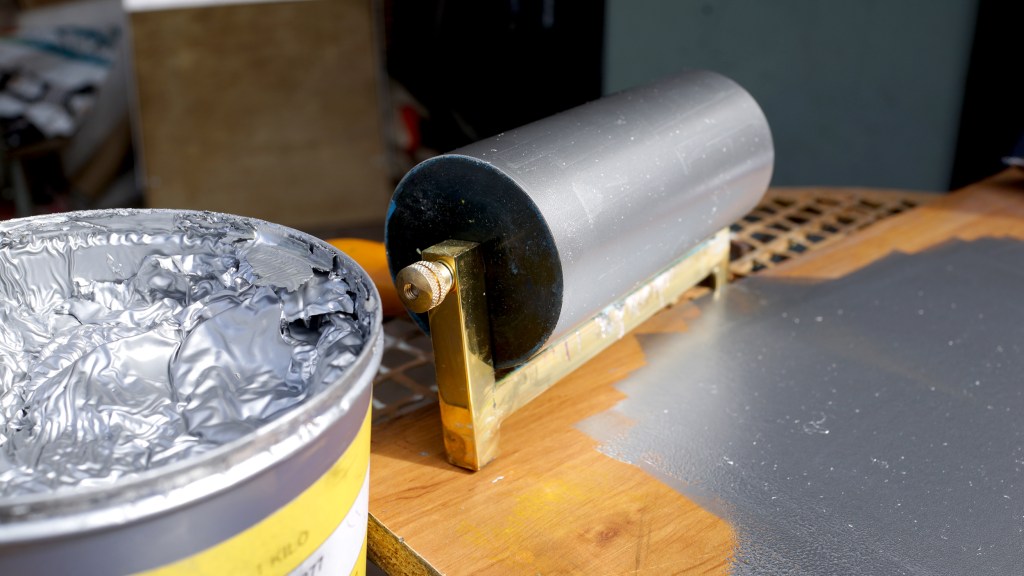 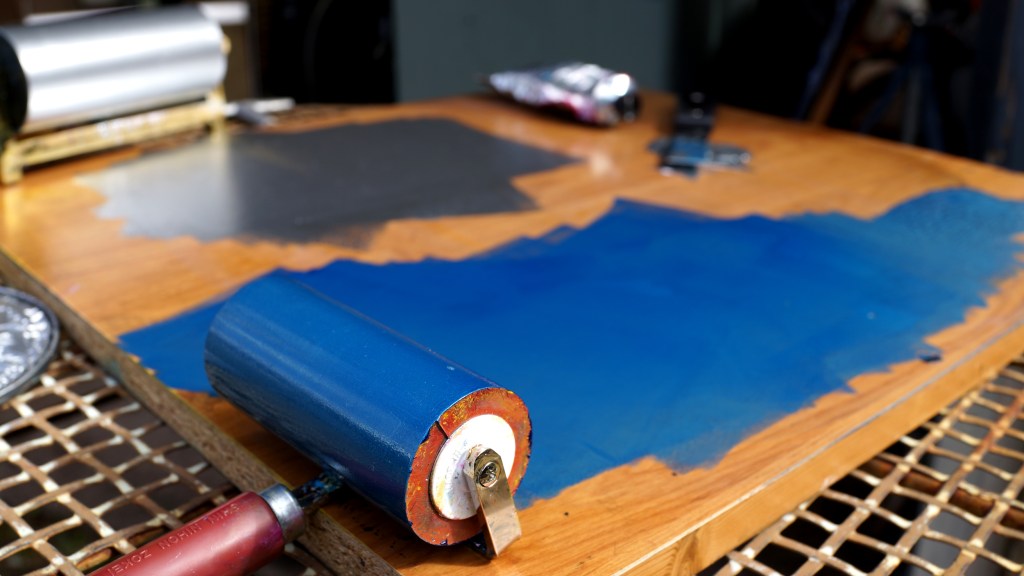 The print was to be on a 50x70cm sheet, which meant that every inch of the bed was filled with type. In order to get the paper through I had to remove the feedboard, making printing  and removing the paper from impression quite difficult. 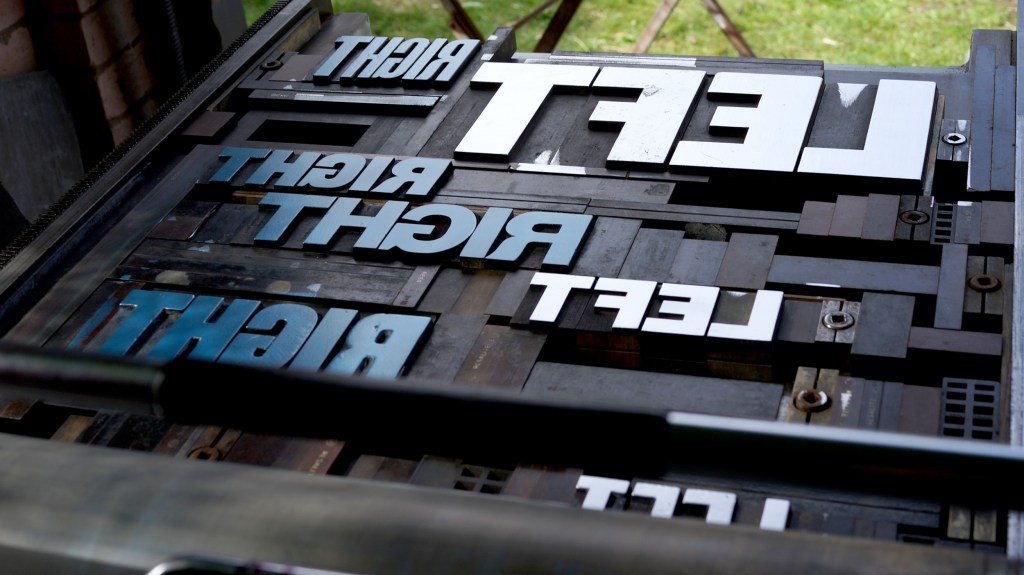 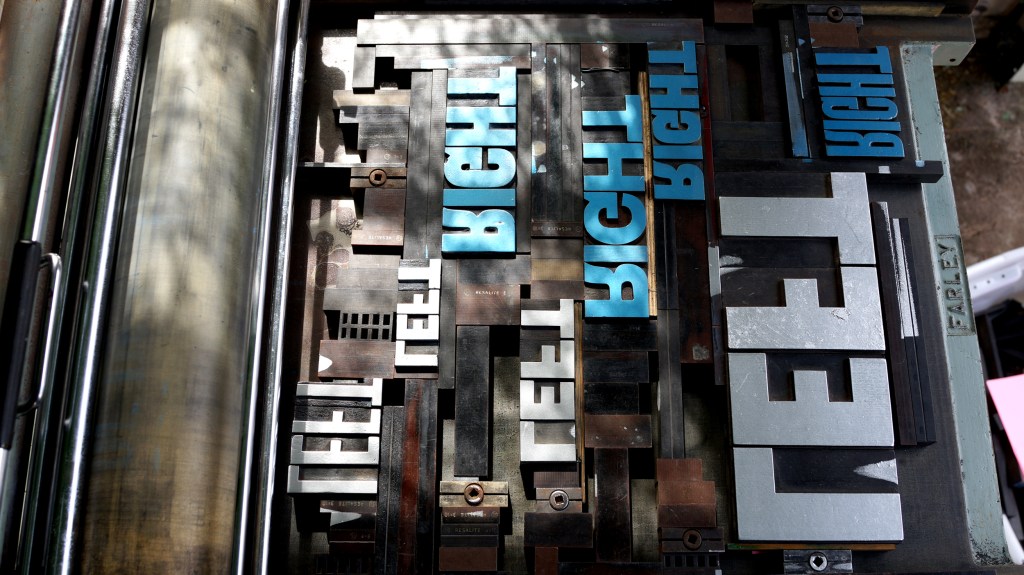 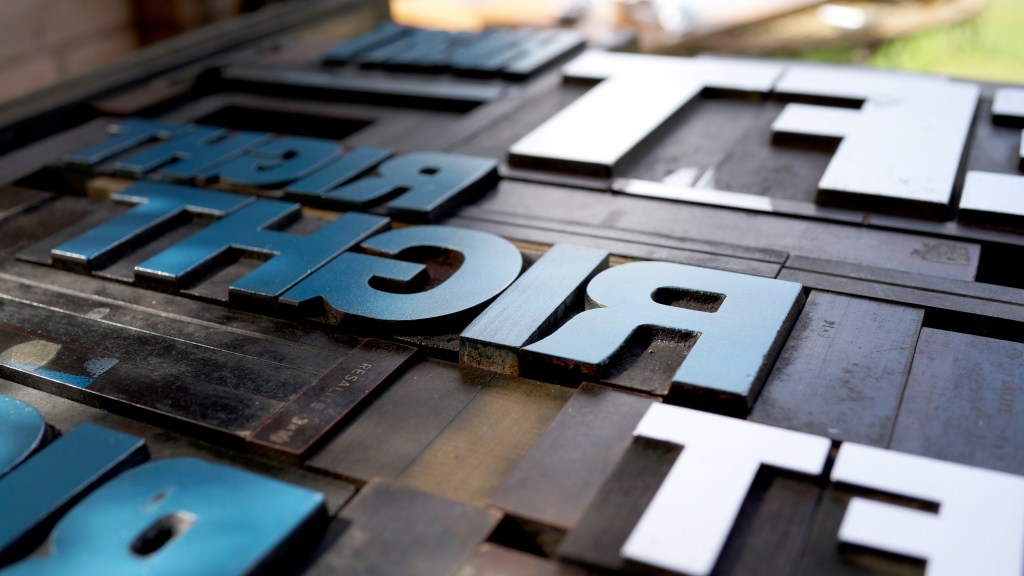 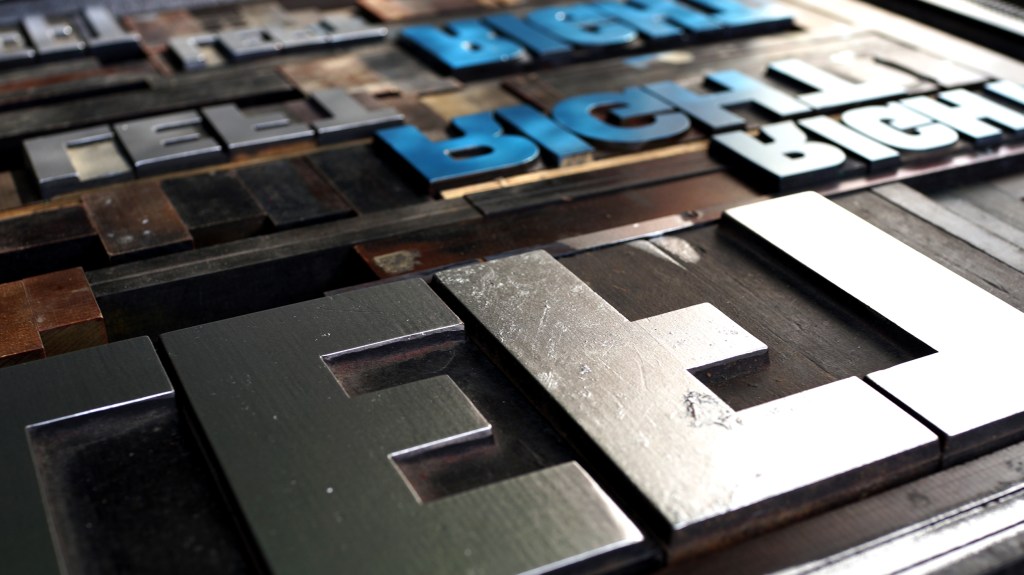 After a little make-ready, I created 10 prints and got 7 good ones before I ran out of paper stock. As I was pushing the size limits of the press, I got a few little slurs where the paper had slipped and I couldn’t stop it from doing so (I think my grippers need tightening). Overall I was really happy with this typographic representation of the rhythm. Once dry, I framed it up in a simple black frame. 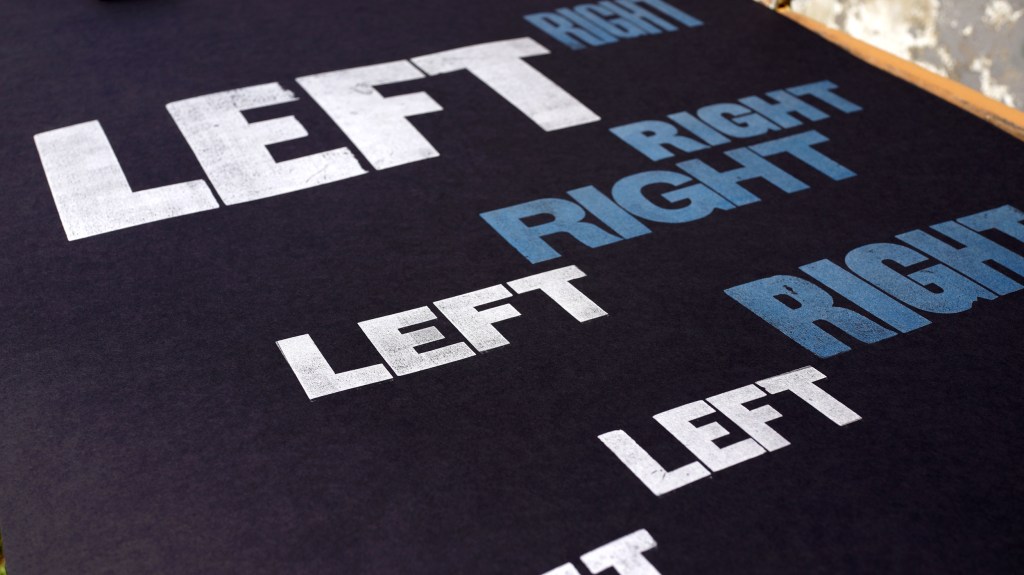 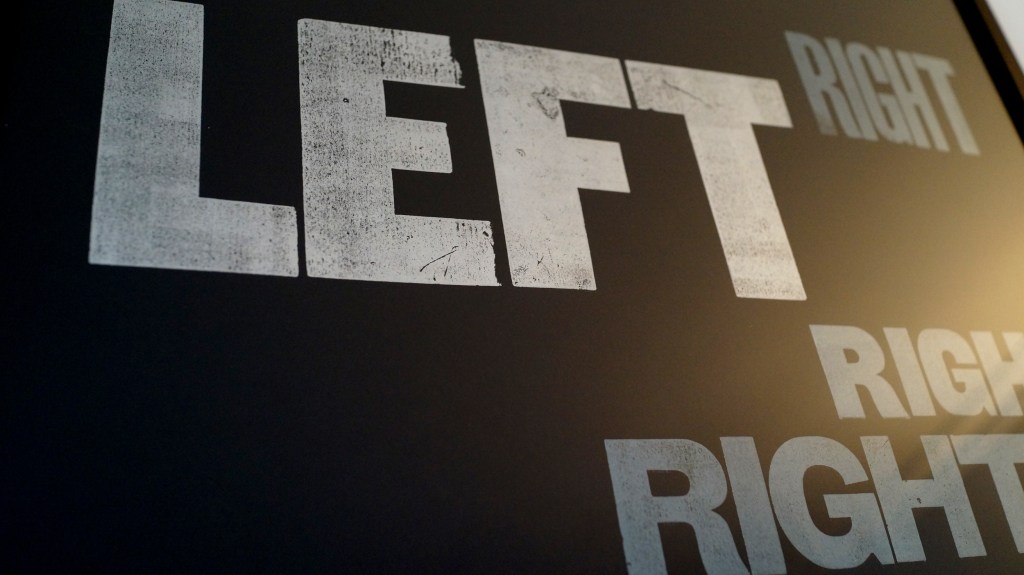 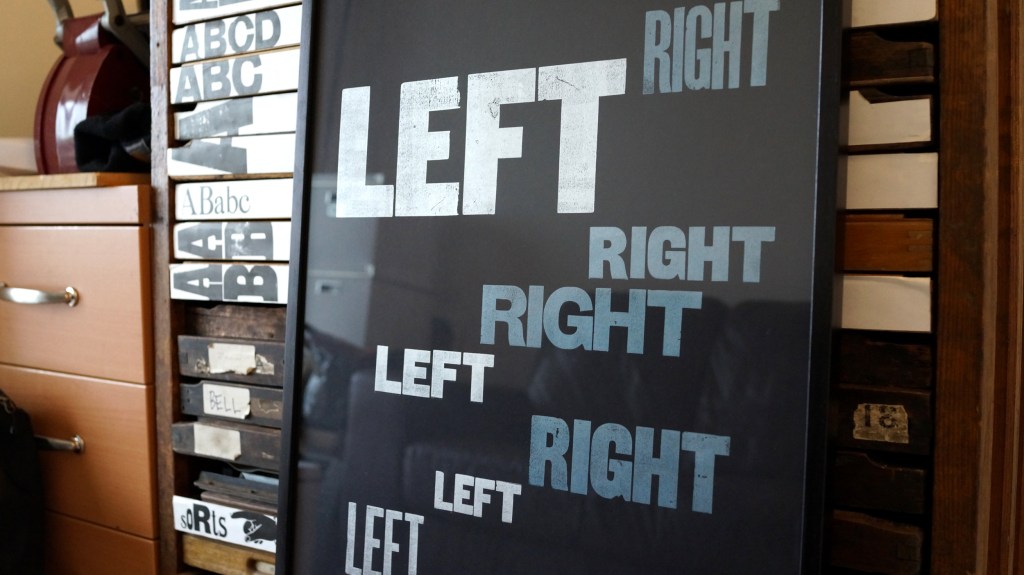 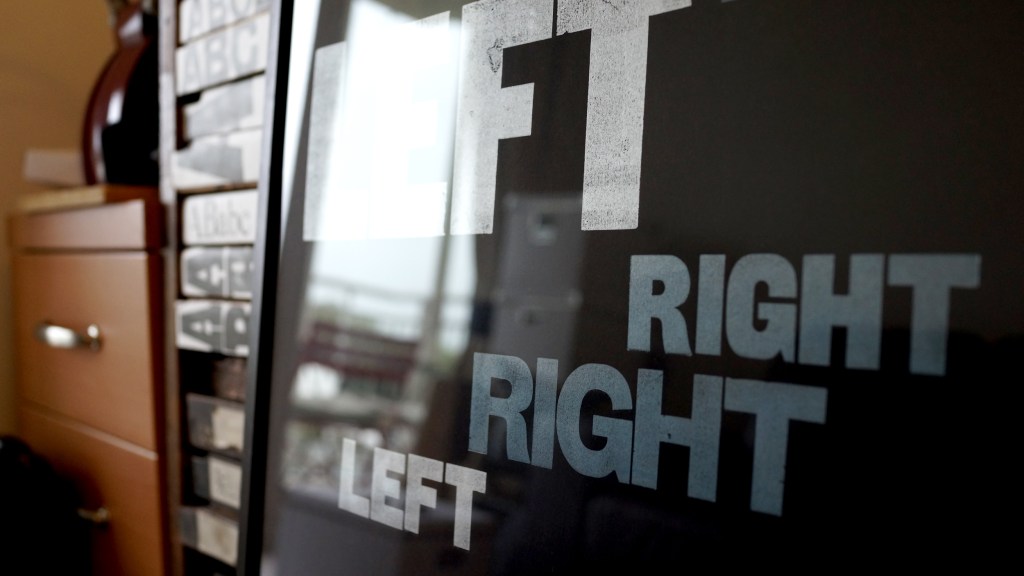 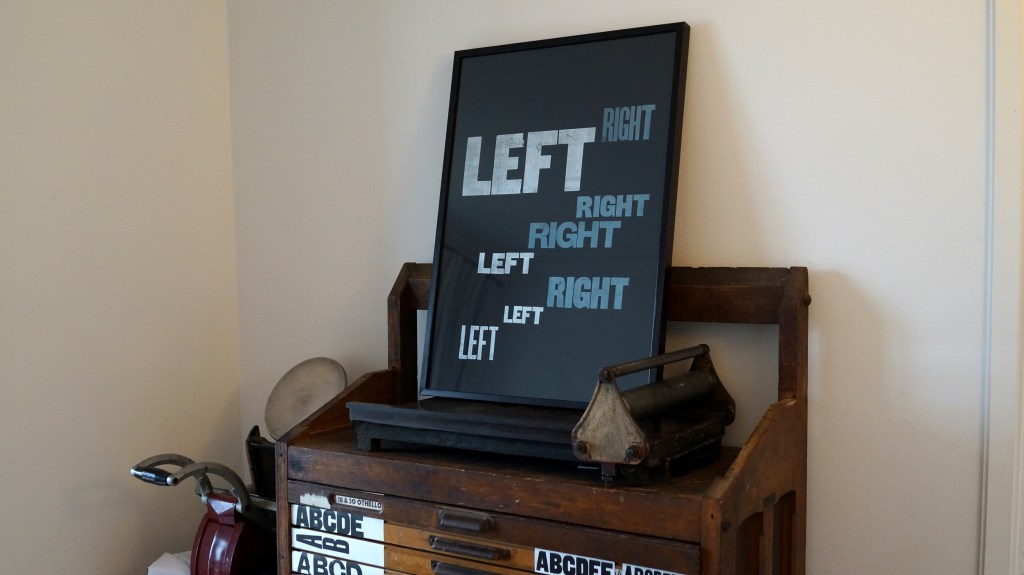 Print number one done, we went for a lush walk in the Black Mountains to watch the sun set. 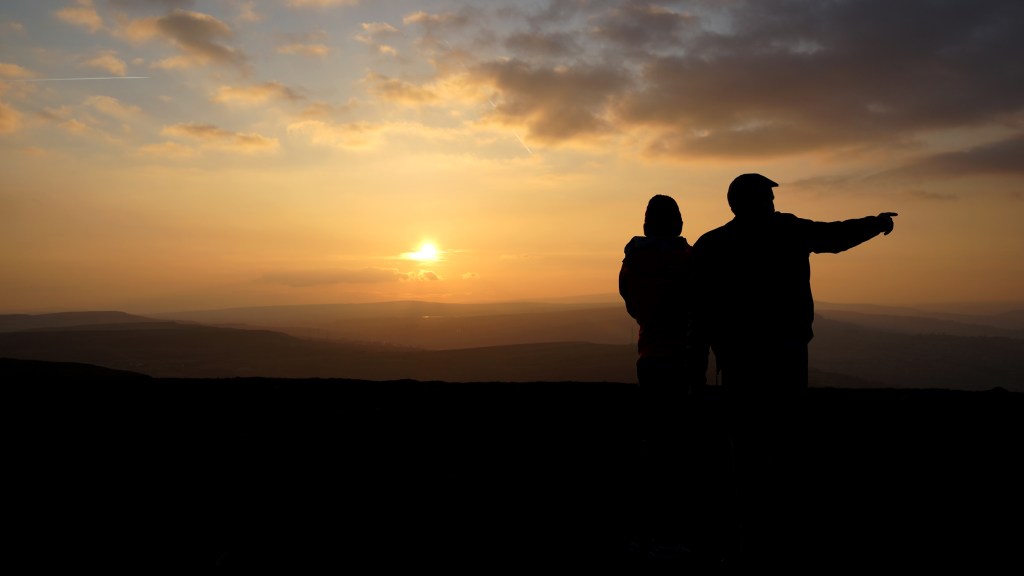 For my second print, I wanted to create something a little more abstract. To do this I planned to represent an analogue sound signal by using full-face rule. The idea of digitising my my analogue voice, then printing it in an analogue process interested me so I spent about 20 minutes shouting at the microphone in my laptop to record my voice pattern. I ended up focusing on musical words and the most balanced of those was when I yelled FUNK! at the laptop. Kat thought I was yelling profanities and it took a little explanation to explain what the hell I was doing in my little print room…

With the direction of the print sorted, I set about ordering some full-face 6pt rule from The Elrod Press. Within 24 hours of my first call to Andy, I had a 6kg package that looked like a pipe bomb. Great service! I went about setting the forme up directly in the press. There was no way that I’d be able to lock this up easily in a chase, so again I bodged it together. (sorry purists). This was printed back in London in our  spare room on my St. George galley proofing press. It’s a basic press, but does the job! 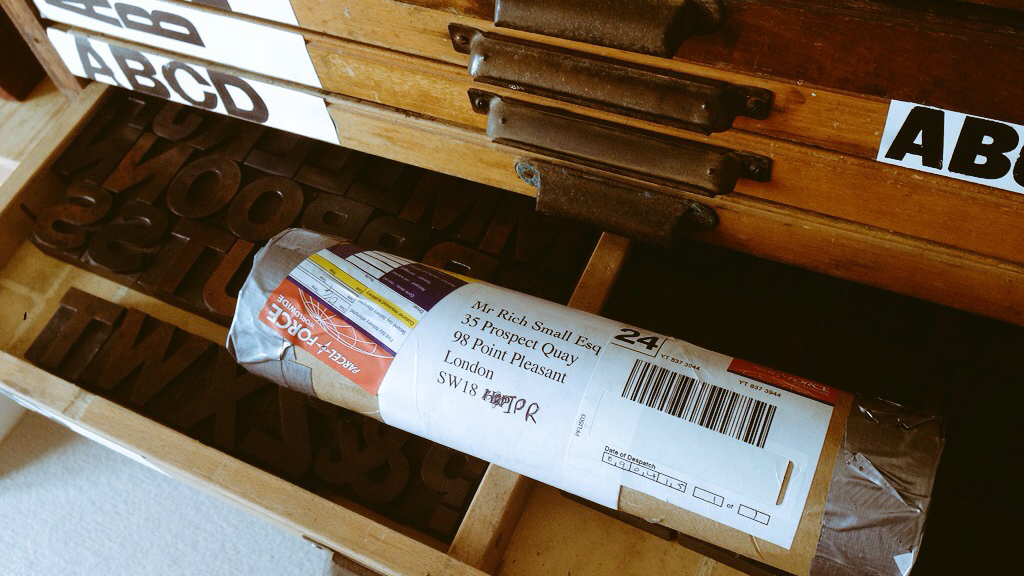 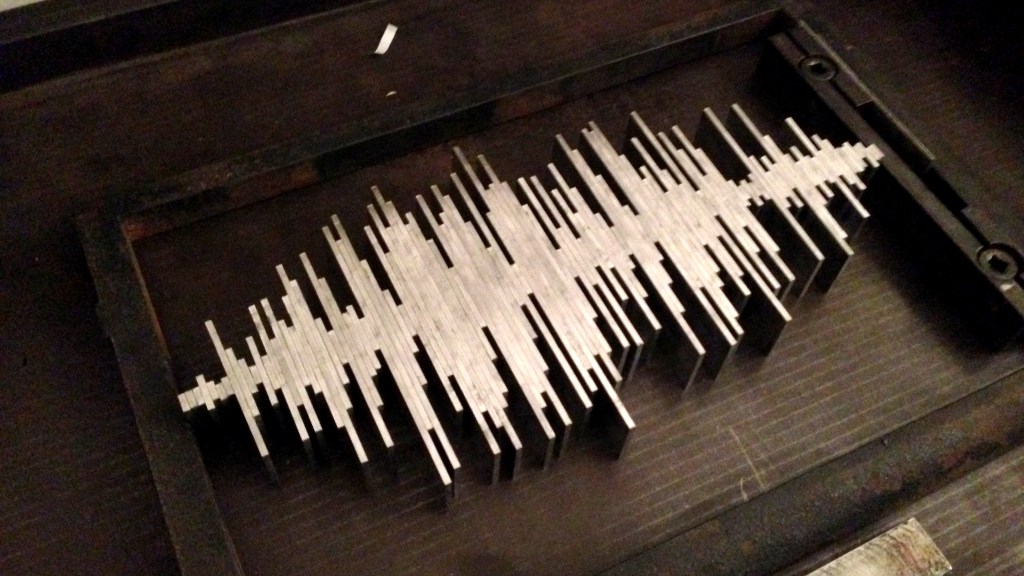 Using some lovely 300gsm Somerset Velvet with a deckled edge that I’d picked up from Presstival in the summer, I played with a few colour combinations before settling on a subtle blue split fountain and also some plain black versions. For the life of me I couldn’t figure out why some of the rules were not printing perfectly, despite looking okay on the press. It turns out that I had set a couple of them upside down – what a prat. Ah well, I’ve learnt this now and I’m going to claim that it adds to the character of the print…

For the exhibition, I wanted to float mount in the frame so that the deckled edge of the paper was emphasised. It took a little bit of playing with mount board to do so but I was really pleased with the result. 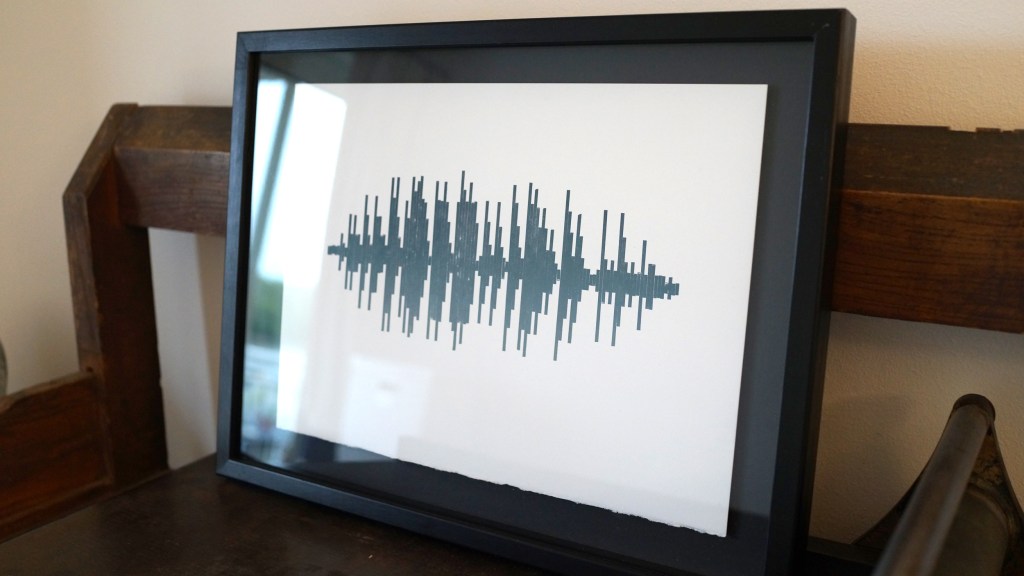 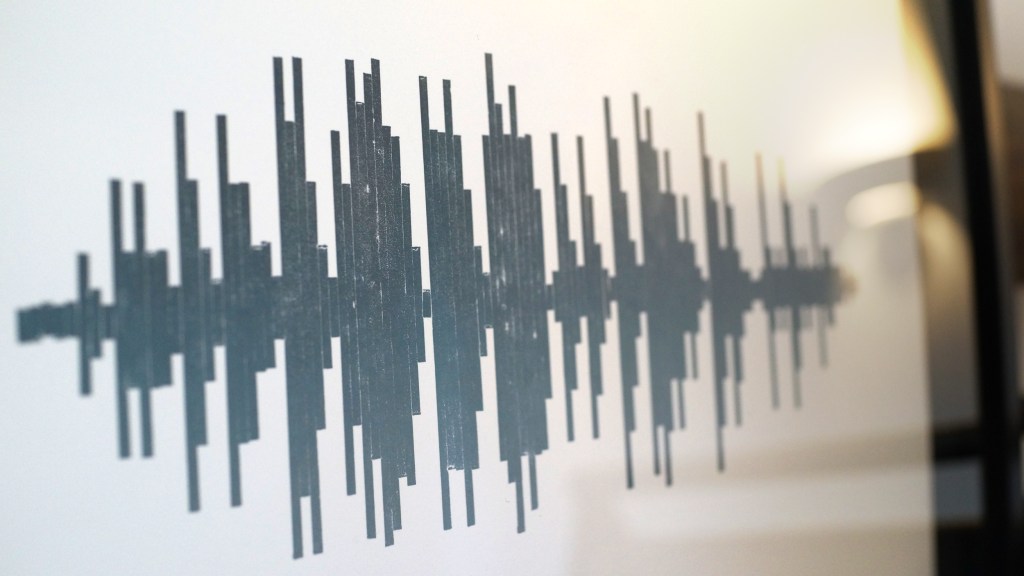 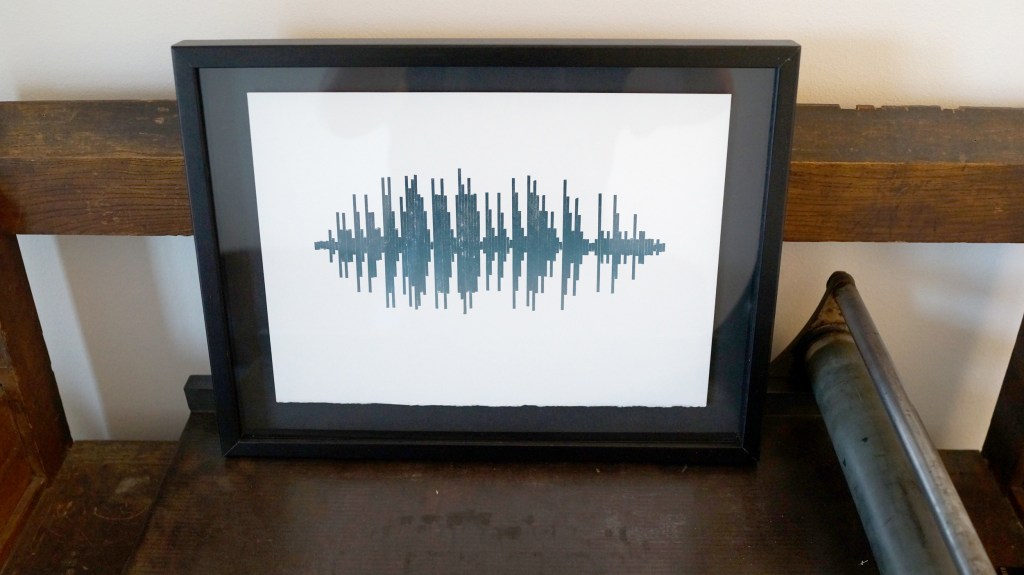 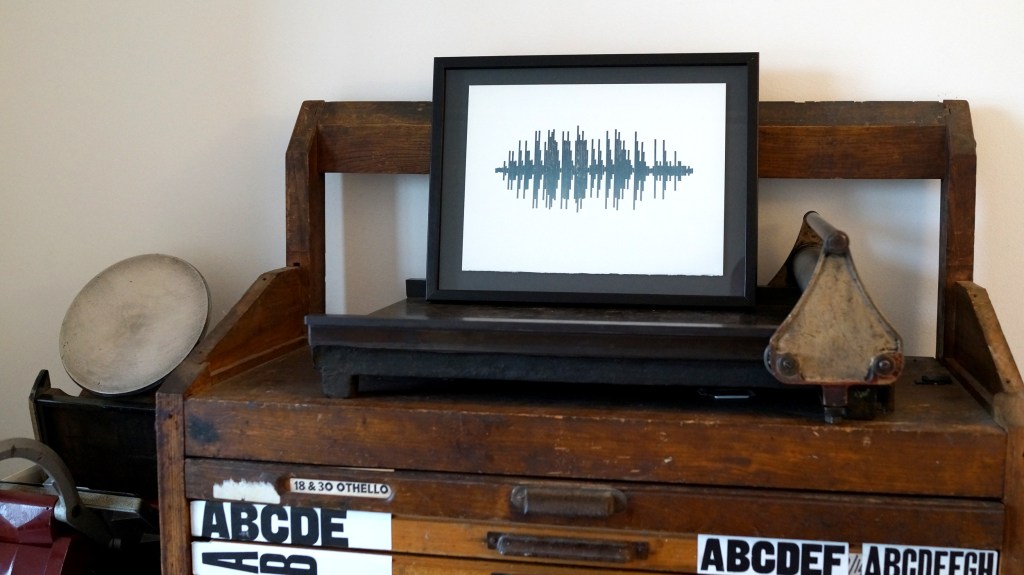 I dropped the prints off to Nick last weekend, and had a great catch-up about old times over a coffee. I can’t wait to return there on Friday 22nd May to have a few drinks and nervously see my efforts alongside my printing idols. It’s great to be challenged to try and improve printing quality, and I’m learning all the time, so I’m over the moon to have been asked to participate. I hope to see some of you there!