The Ludlow works! I was sceptical, but always hopeful that it would be fine but after 15 years sitting in a shed there was always a chance that it wouldn’t get going.It took a weekend of tinkering and oiling and cleaning and replacing parts but we got there. I had a load of help from Scrapman Dad, of course…

Whilst I find space for it, the Ludlow has been sat in a small warehouse in Gloucestershire. This gave us a bit of room to get around the machine, clean out all the spiders and find alll of the bloody oil holes (they hid some pretty well). Once we had brushed it down and got rid of a load of accumulated gunk, we then rubbed all of the work surfaces with WD40 to clean them up and give a little barrier against rust. Cosmetically it looked fine, now all that was left was to clean the mechanism and all the moving parts before turning it on. 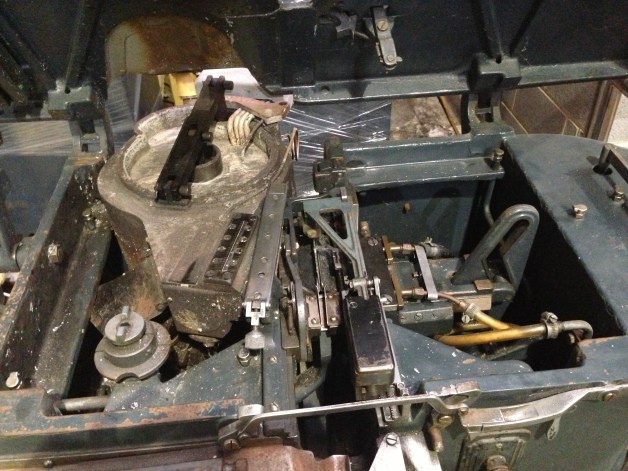 The Ludlow is incredible in that it works off of one single cam shaft, with many different cams moving various parts to cast a slug. It was important that these cams were clear of stray bits of lead and gunk and that they allowed free movement. If they didn’t the machine has a safety mechanism key, which snaps to save the machine from shearing. After wiring the plug and giving it a little oil we turned the cycle by hand (with the crucible plunger detached) and the safety pin sheared straight away. Bugger. After speaking to Elrod Andy about this, his recommendation was to ‘oil the crap out of it’ (or something along those lines). We filled all of the oil holes and let it sit for an hour or two – it worked a treat. Good man, that Andy is. 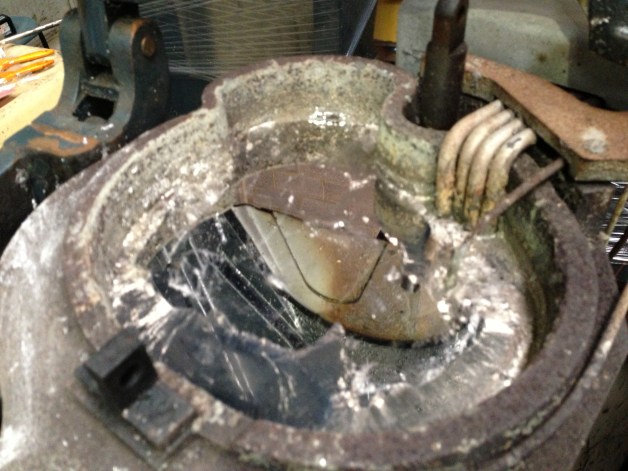 Next was the scary bit – hot metal. With a freshly re-wired plug (and checked by an electrician), we turned on the heating element – it still worked!. Once the mouthpiece and crucible were up to the correct temperature (around 600 F) it was possible to clean the mouthpiece and lead crucible. This scared the sh*t out of me, as it involved removing the plunging mechanism from a pool of molten metal, and cleaning it with a wire brush and ‘Lubriclean’ lubricant whilst still hot. Once that was clean, we moved on to cleaning the crucible using an industrial metal contraption. I can only describe this process as ‘extreme toilet plunging’. Luckily, there were no splashes of metal and got through the process unscathed.

View a video of the machine casting

Finally, it was time to try and cast a slug. A whole 2 days of cleaning for this moment… I (imaginatively) set my name as the first slug to be cast in 48pt Tempo Heavy Condensed, locked it in, and pressed the start button. I then ran away from the machine like a little girl. The Ludlow had jumped into life, started moving and plunging and cranking… we waited for it to squirt lead everywhere, but it didn’t, we then waited for it to eject the slug onto the slide, it didn’t. Balls. Instead, the slug dropped out of the bottom of the machine. Grrr.

Back on the email to Andy, he told me to ‘oil the crap out of the ejector slide’ (or something along those lines). We then tried again and it worked a beauty. The Richard Small foundry was up and running. Next step: world domination, or as I like to call it” make stuff for the wedding… 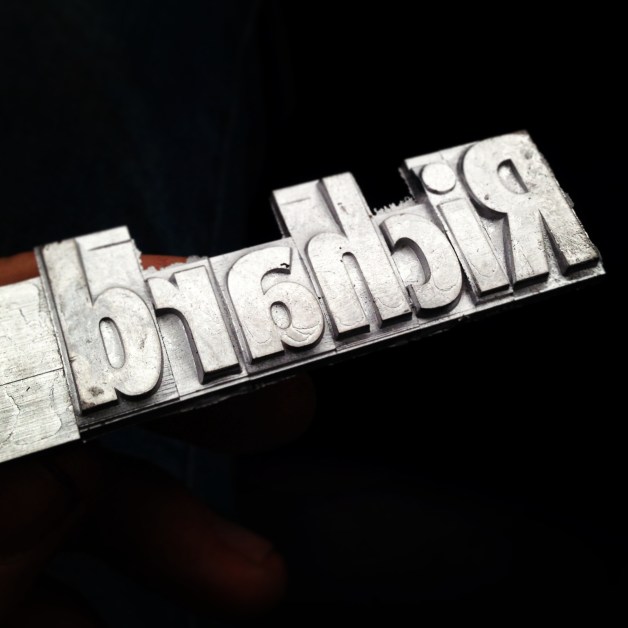