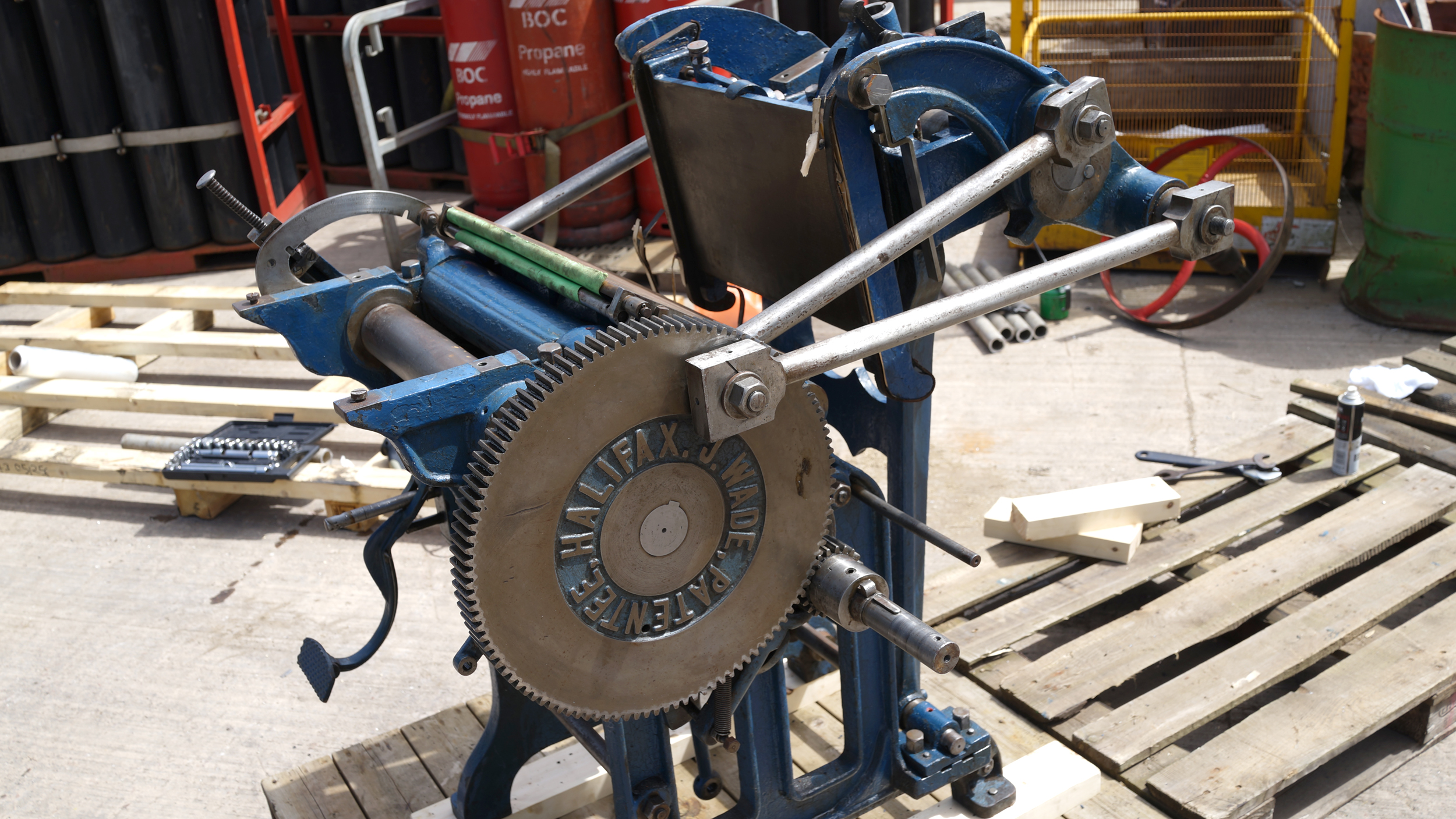 Following the collection of my Arab Crown Folio from North Wales, the press has been sat in pieces in a warehouse waiting to be put back together. I would have loved to have done this the same day that we got it out of the house in Noth Wales, but we were all too knackered to do so. In the hope that I’d remembered how we disassembled the press (and that all the parts were there), I set off back to Bristol over the weekend to get the platen up and running again with my old man (hero).

It was a nice day with no forecast of rain and the press was all on pallets, so we decided to do the assembly outdoors. This was great apart from the fact I’m a closet ginger and burn when it’s cloudy. There was a forklift truck available making the move outside pretty easy. Once it was out, we separated all of the parts based upon when we would need to put them onto the press. 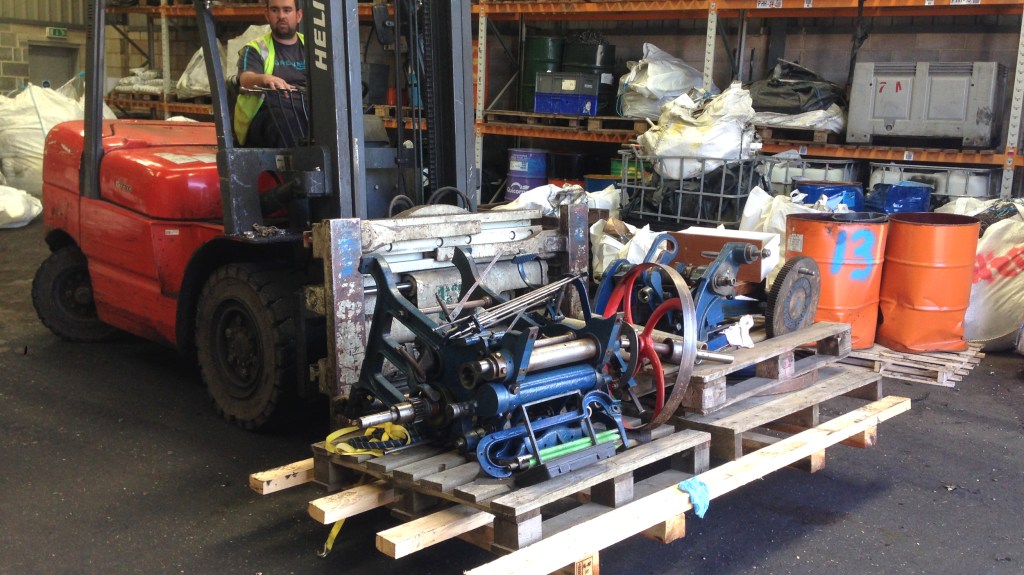 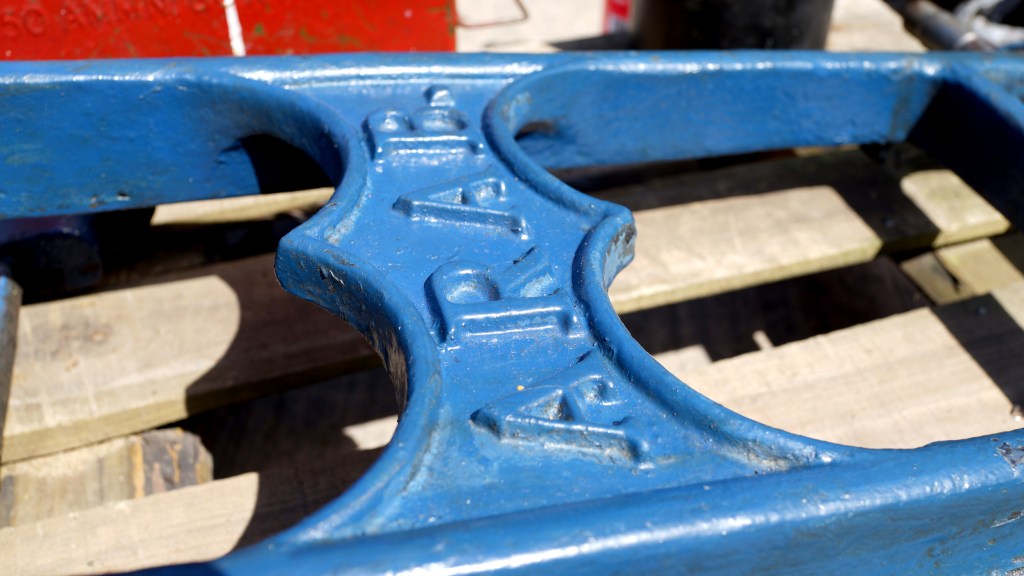 As the platen section of the Arab was already laying down with the feet in the air we decided now would be a good time to put the press onto 4x2inch struts, which brought the height up and allowed treadling to be possible. Strangely, when the press is floor-mounted, the treadle does not complete a full revolution and whacks into the ground. A couple of drilled holes and sturdy bolts later, we were ready to right this section to its feet. Bring in the heavies and high-vis. In no time, we were upright and stable on the heaviest section of the press. 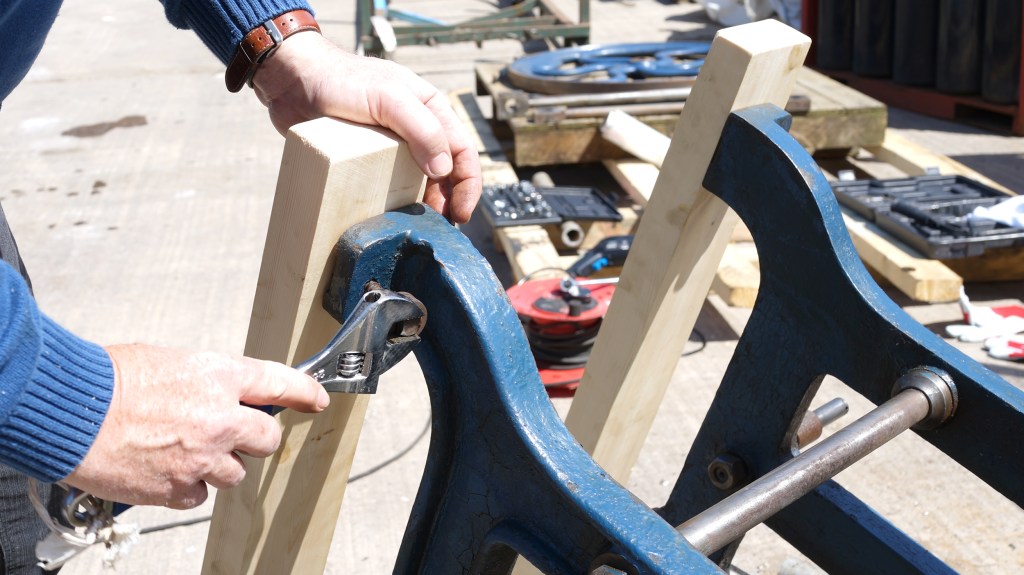 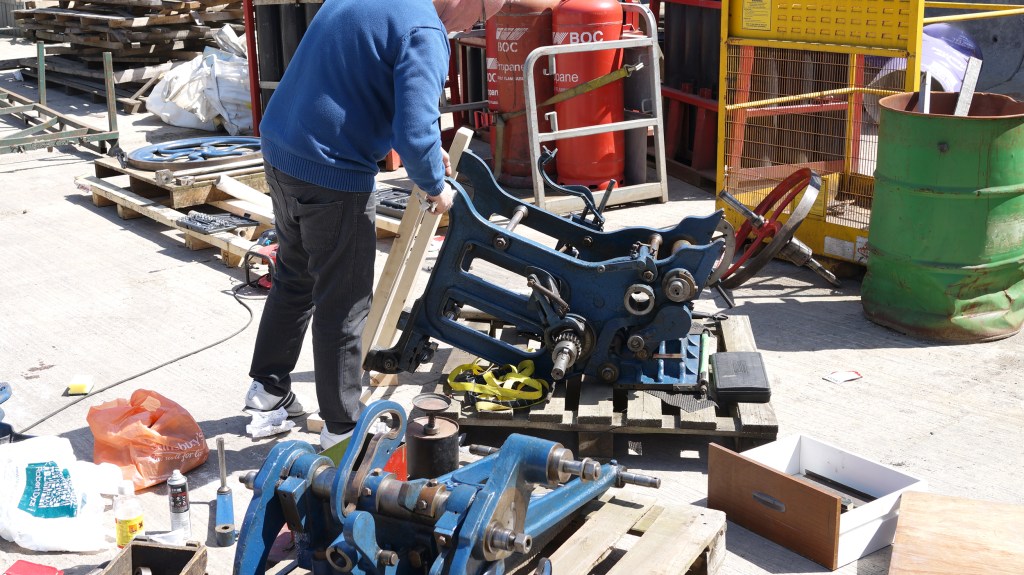 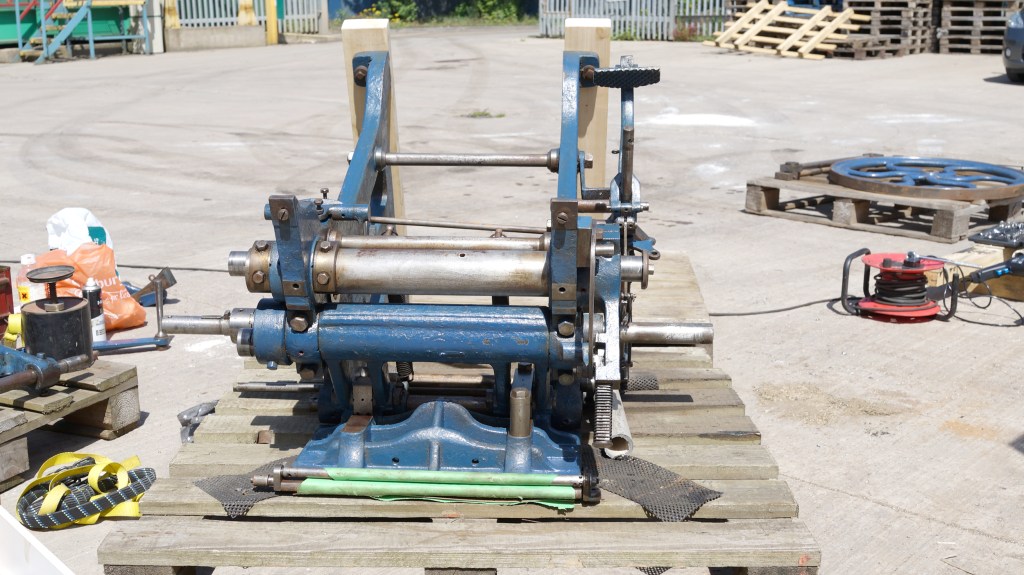 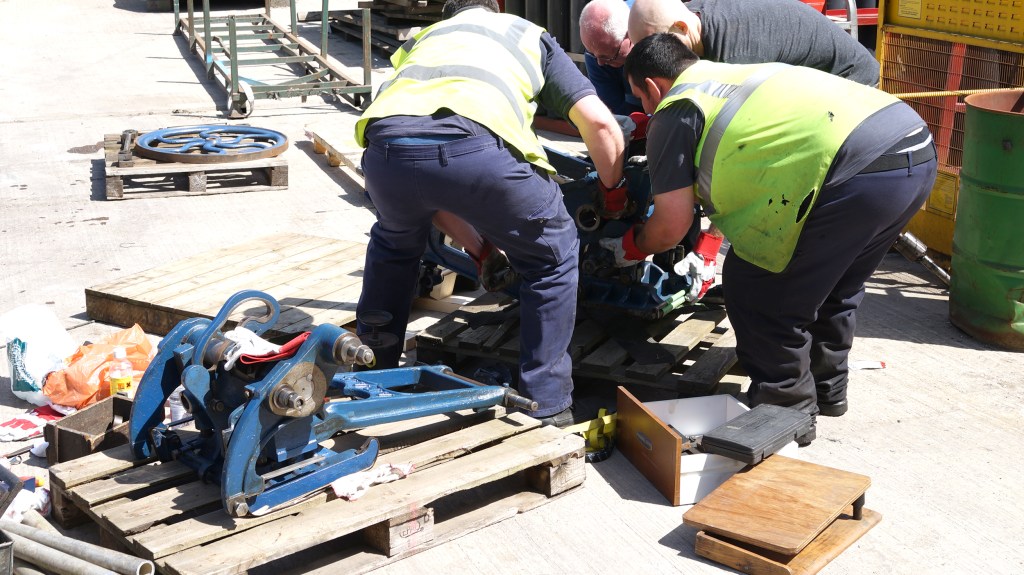 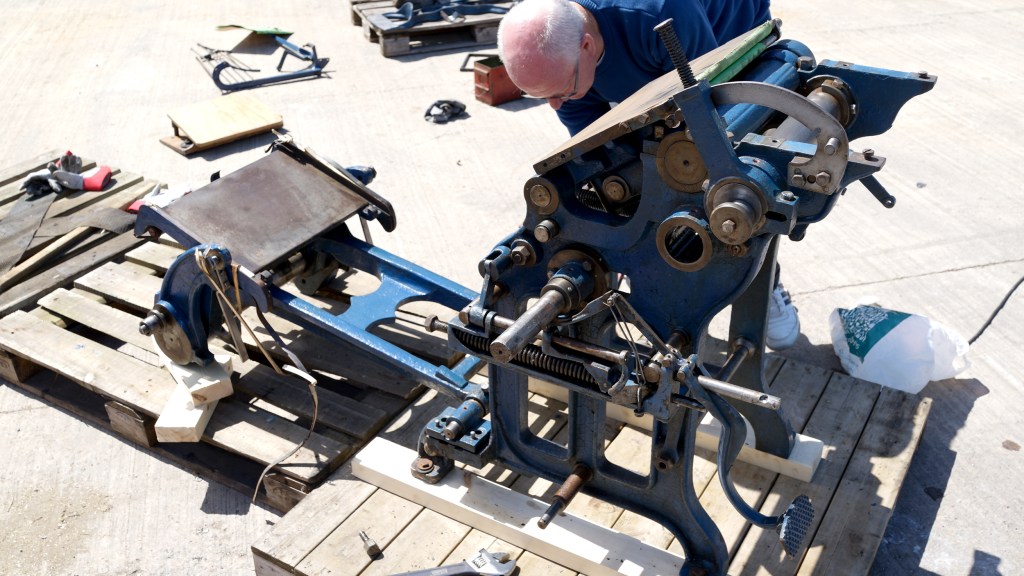 Next we needed to attach the press bed section to the platen by connecting it at the base of the machine. We made sure to clean and grease up the pivot point here, as even a small amount of grit would cause irreparable wear over time. When we got it perfectly in alignment the 4 small pins dropped into their corresponding holes, meaning we could then secure the pivot with a bolt and set about lifting the bed up to the platen. Once in place, it was then secured by the first of three large connecting rods. When that rod was in position, the press was stable and should not be so dangerous to be around – I made sure it was well bolted at this point. 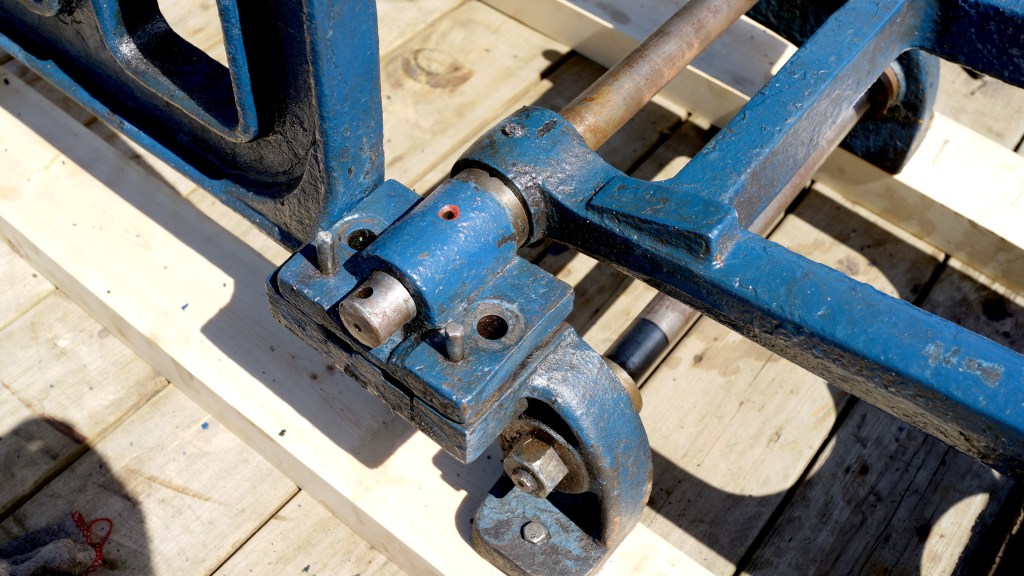 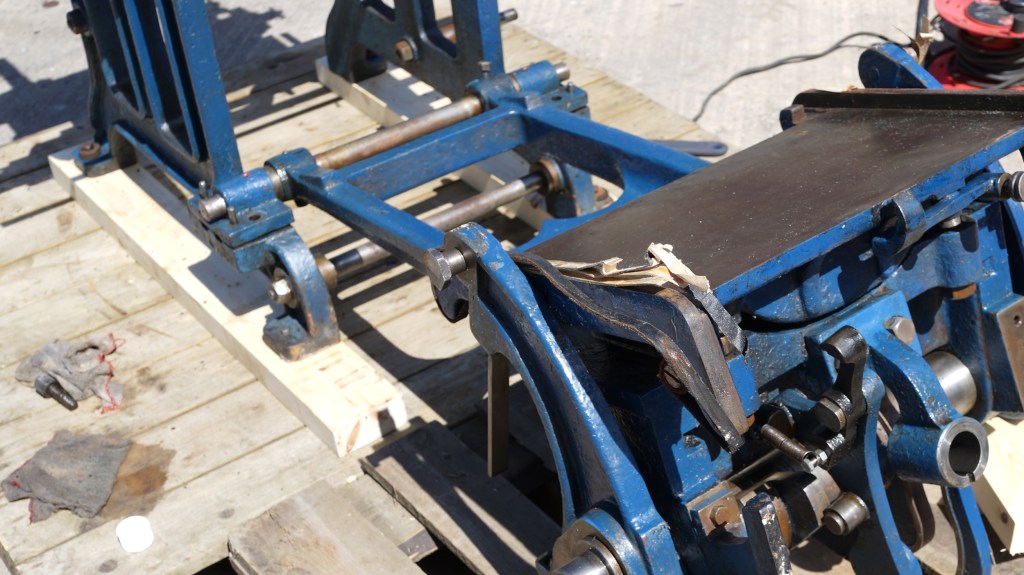 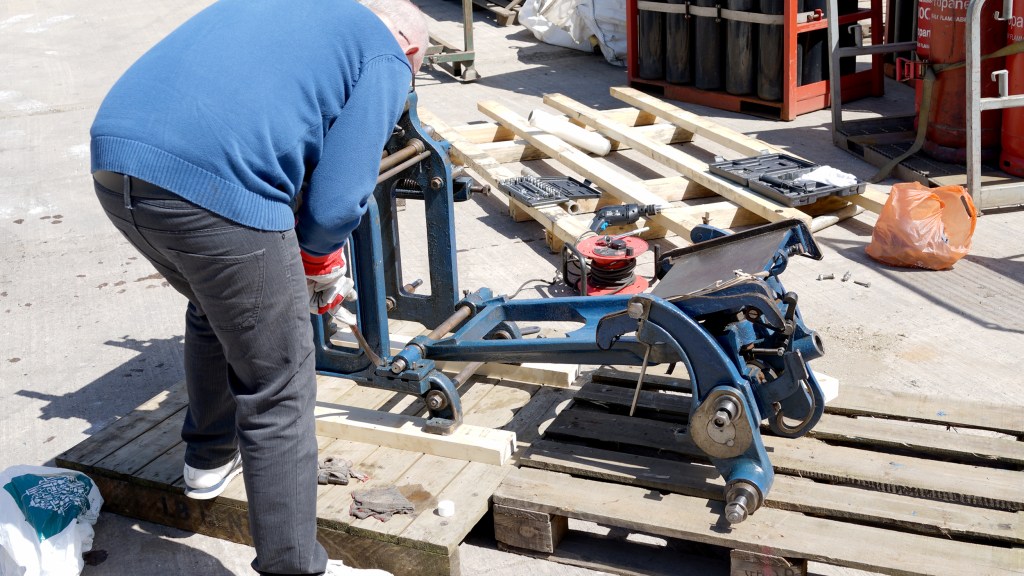 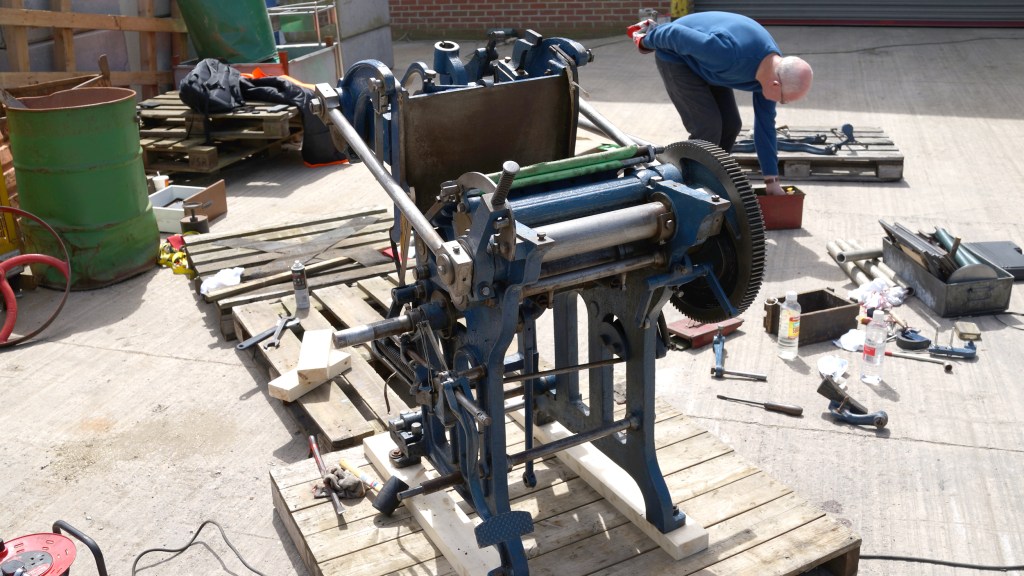 Next was the second connecting rod on the opposite side of the machine, followed by the Arab wheel (The large cog mechanism. Then came the final connecting rod and then the flywheel. It was really beginning to take shape. At each step we were careful to clean out any oil holes, friction points and any bare metal before re-applying oil/grease where required. Part of me really wanted to give the press a proper clean down but there wasn’t much time to get it all assembled and aesthetics can be sorted on another day. 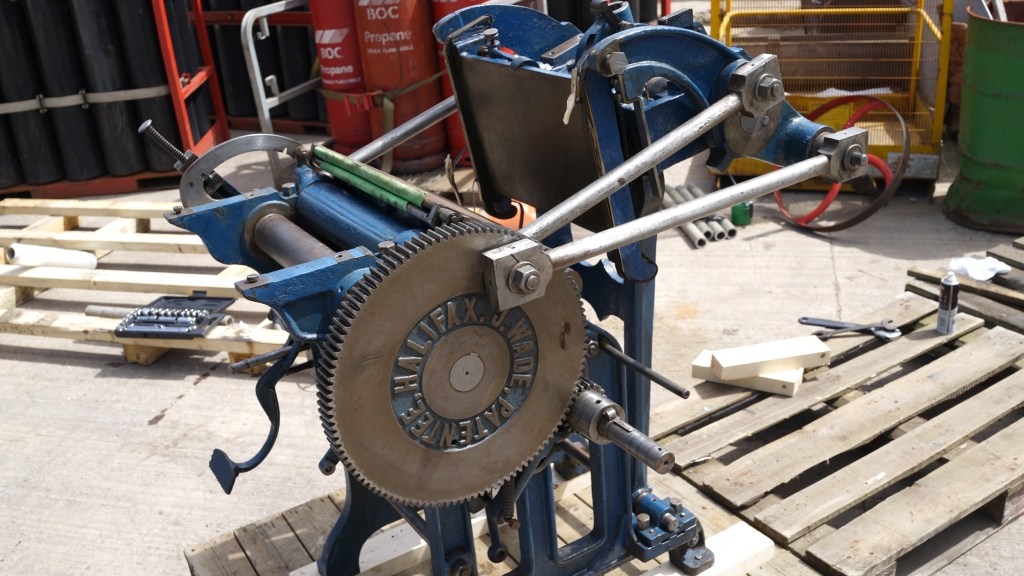 Then came the feed board and inking disk. I was worried that the inking ratchet mechanism was slightly bent in transit, but it turned out to be a loose connector, and it worked perfectly. As did the feedboard – even the swivel mechanism was fine on this. Result. 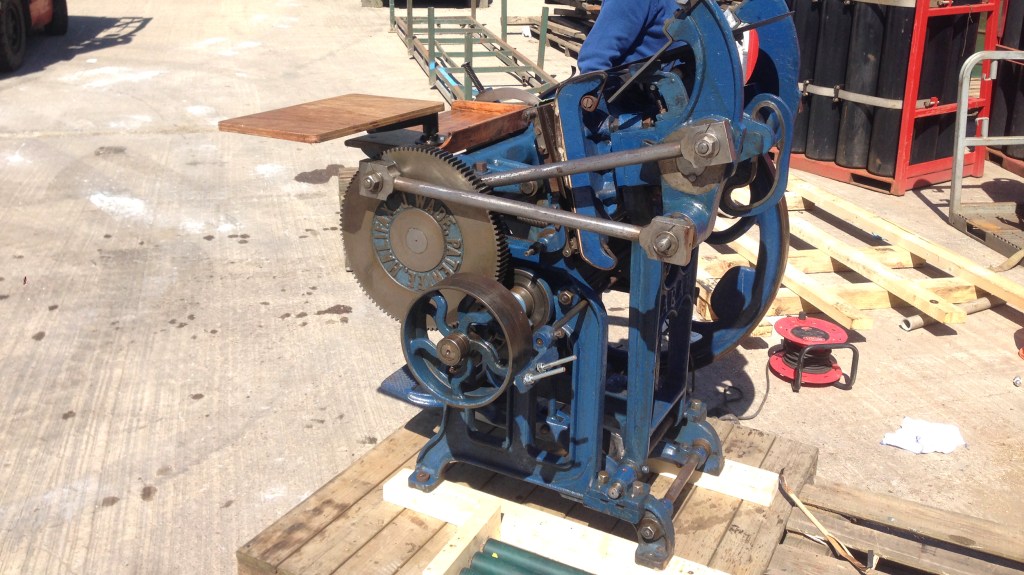 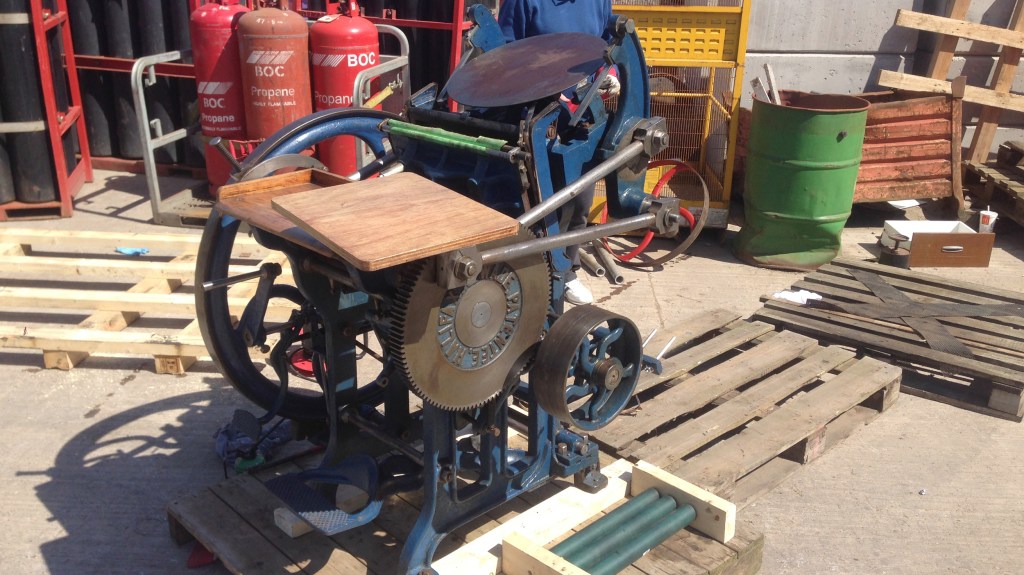 The last two bits to assemble were the smallest, but also fiddly. It would have helped if I had paid attention whilst Andy had removed both the paper lay mechanism and also the clutch/brake/safety guard a few weeks back. I had a fair idea how they worked together, but had to check my old friend the internet to jog my memory. Engineering back in the day really was something else. With a single flick of a spring, the press is designed to throw the flywheel into neutral, apply a brake and also slip any motorised belt onto a second unlinked pulley wheel.

(Look at the two small wheels on the right of the press in the above picture – the left one of those two is linked to the main shaft that drives the flywheel, the one just to the right of it spins freely. This allows the motor belt to be moved out of drive with a simple lateral movement of a guide rail without unhooking it from the system. Genius.).

I am not a genius, so it took a lot of working out as to how this all went back together. A couple of hours later we had it working perfectly again. We kept the guard rail off for now, so that it doesn’t get damaged over the next few weeks of storage. This whole process has given me a speedy education on the workings of such a large platen press. If this had turned up whole, I wouldn’t have had a clue how any of the mechanisms worked. 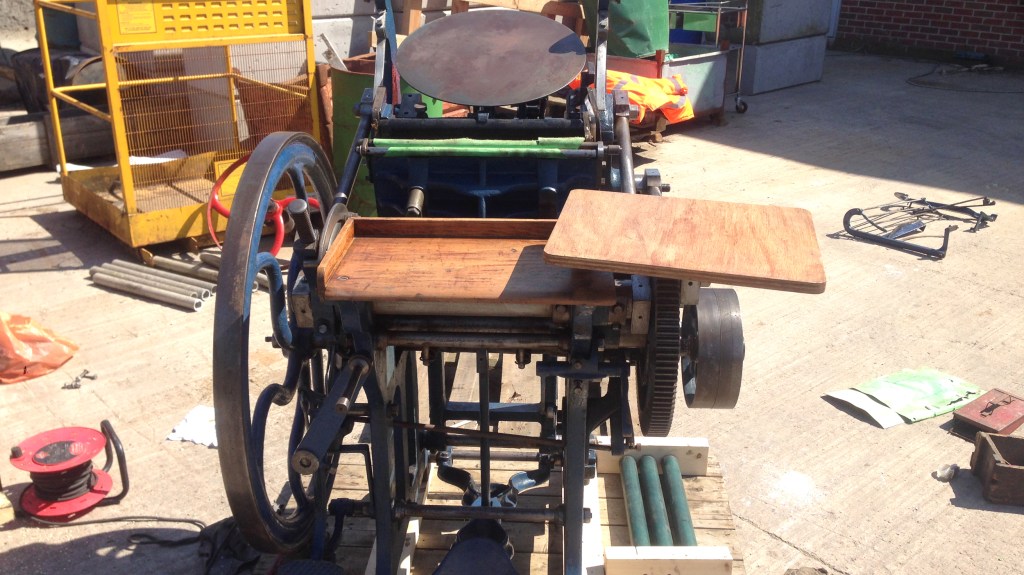 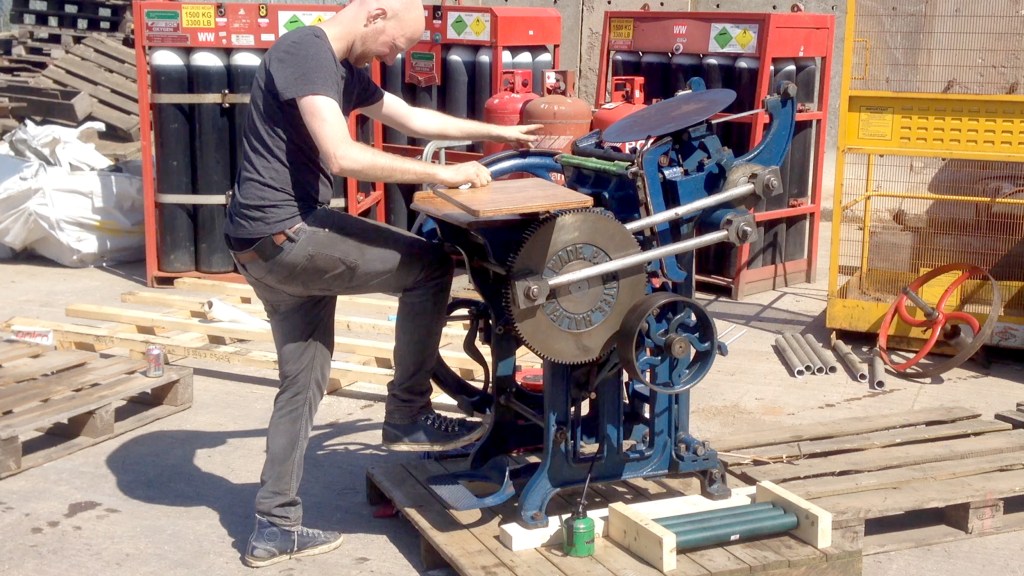 Finally I gave all of the exposed areas of metal a good coat with oil to prevent rusting, cleaned out all oiling points and gave a good lubrication before turning the press over a few times. below is a quick video of the press running smoothly. No noises could be heard apart from the ink disk mechanism. Really impressed with this old beast…

With the Arab now back up and running it was time to get it back inside, which was the single scariest part of the day. We bolted the press to the strong pallet that it was sitting on and lifted it (ever so slowly) on the forklift. driving it back to its spot in the warehouse. 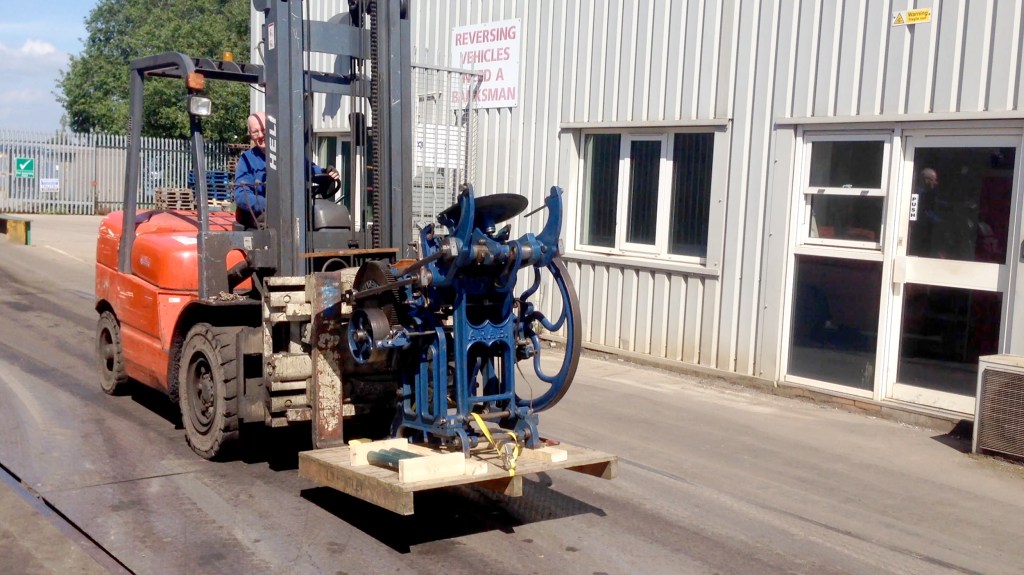 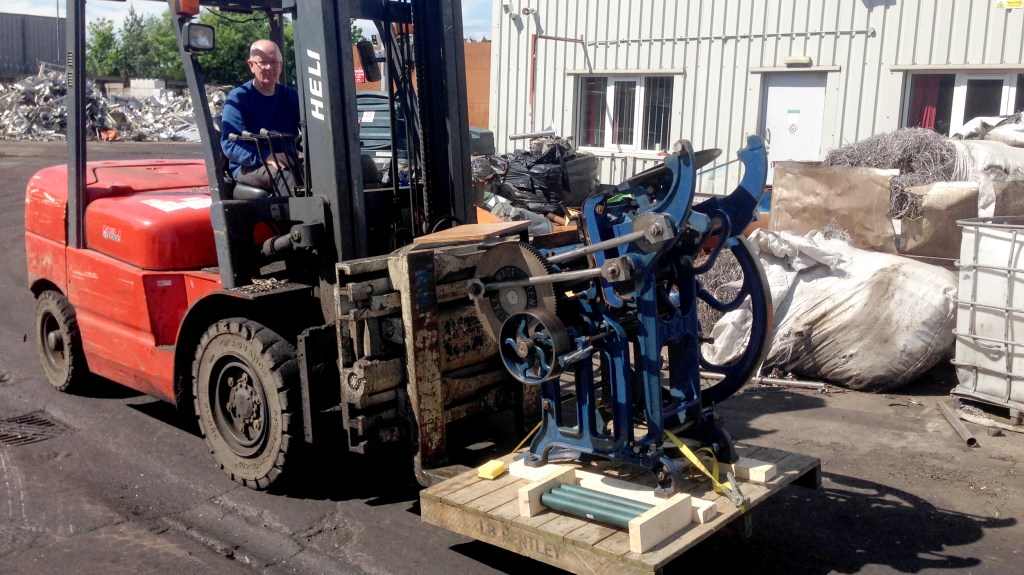 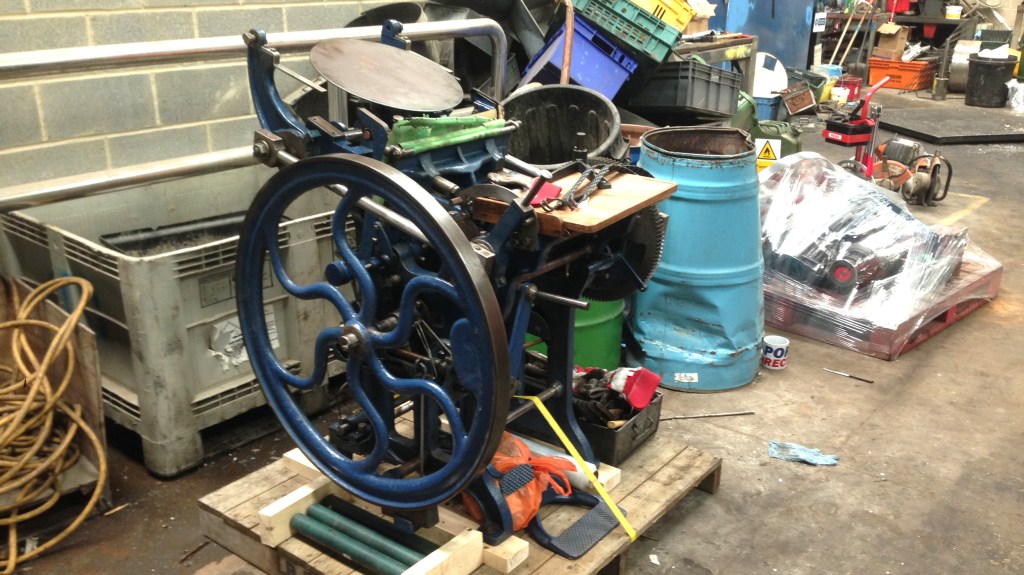 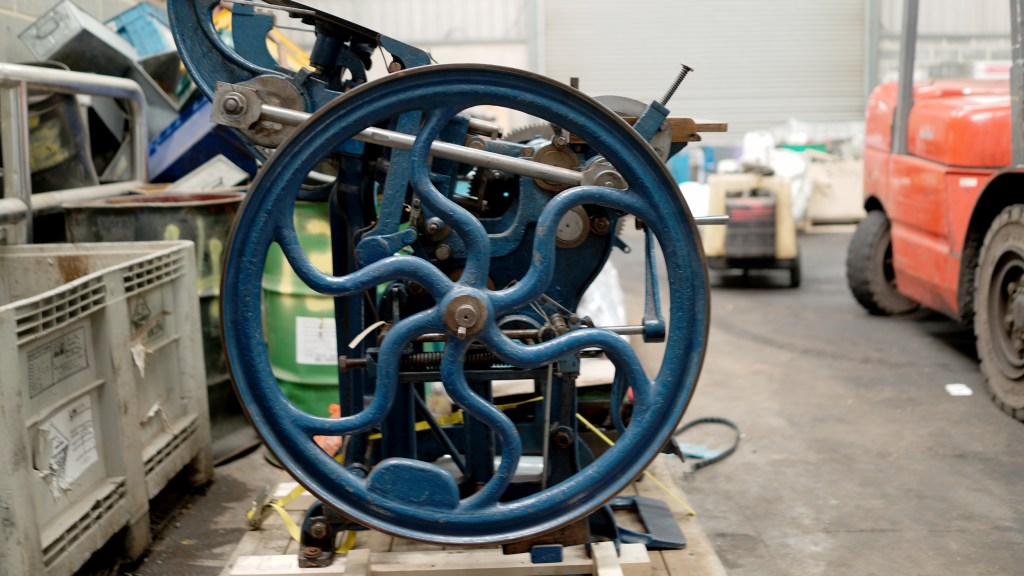 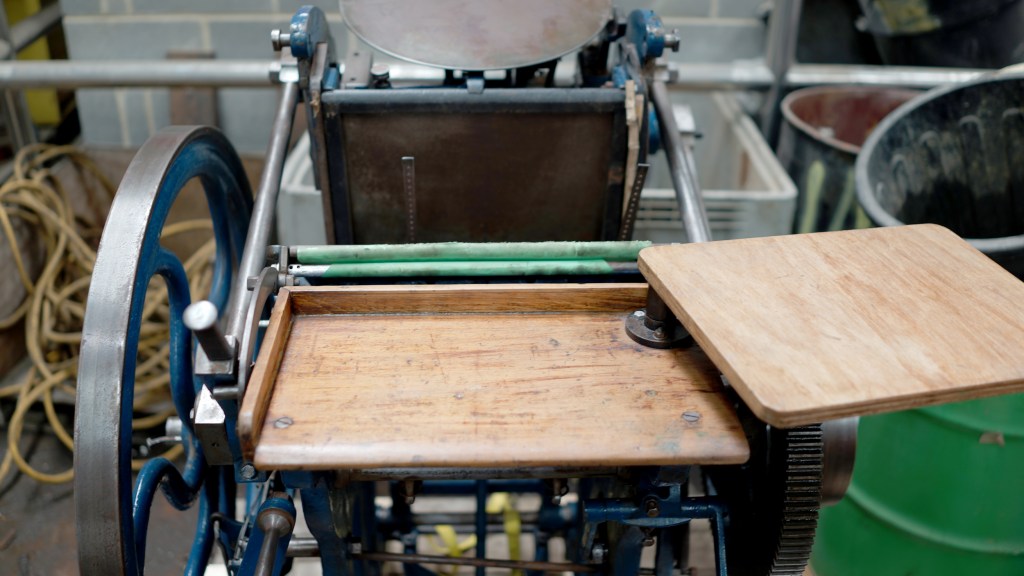 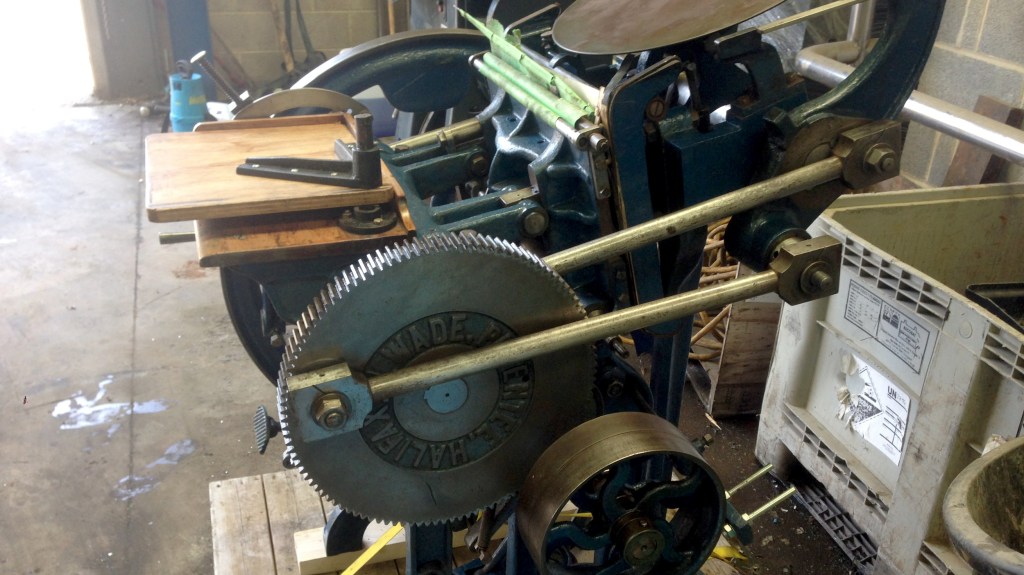 Over the last couple of weeks  I’ve received lots of help and advice from many people includingAndy Taylor (of course), Incline Press, UrbanFox Design for rollers & runners, Margaret at The BPS with information on the previous owner (more on that in another blog post) and many folk on Twitter helping me find some missing parts. I can’t thank them enough.

Obviously there’s no way this will go into my little flat in London, so it’ll hopefully be housed in a location where I can print with it in the West country in the near future. The only thing that I’m missing now are the roller brasses, which I’m chasing down a couple of leads on. I need to create a new tympan for the platen and the leather roller runners are pretty shot, but it will be printing soon…